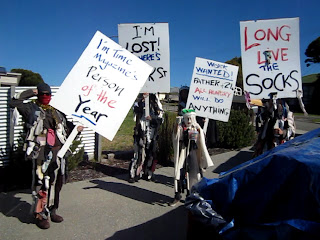 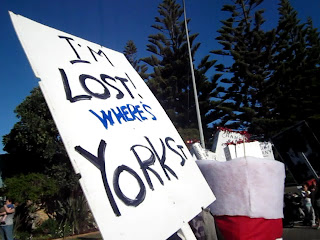 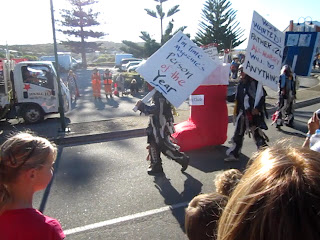 You want my view of the change of route for the annual Christmas Pageant? Here it is.
I was one of sock creatures walking alongside the giant Christmas stocking in the Albany Comedy Club’s ground breaking float last Saturday.  Well, hardly a float, more a stack of recycled socks carried along by feet.
We don’t reckon Flinders Parade is the place for a pageant. At least half of it runs alongside the caravan park and nobody stood there and only a few took advantage of the CWA lawn.
Our vote goes to York Street and most who hung around for a chat at the end said the same thing: York is the king. The Ellen Cove grassy verge did, however, seem very jolly all decked out in stalls and frippery and a number suggested it would be an ideal venue for the next boat load of baby boomers with more cash than sense.
And now let me respond to the suggestion that the change was about refocussing the event to make it a “less commercial, more family oriented affair.”
Hang on, there is no more commercial time of the year than Christmas. It’s all about commerce. When it’s over economic statisticians will reveal how well the economy is doing by disclosing the amount of dosh spent in the lead up and aftermath.
Christmas is no longer about the birth of that great bloke Jesus, it’s full of pagan symbols and mainly about consumption – eating, drinking and wrapping paper.
The mighty York is designed for a pageant – it’s our Main Street, provides perfect viewing both sides, up, down and middle, plus plenty of places for a coffee and milkshake. Middleton – a magnificent beach – might once have been an entertainment hub, but until Calamari’s gets back on the boil, it’s a dead dud.