Much of this first piece originally appeared in the Albany Advertiser7/8/2014
As the plane flew in low over Rome the Coliseum showed itself on the right, out the window between the Russian couple, or were they Polish, hard to tell with a screaming jet engine in your ears.
The landing was not comfortable and when the plane found a place to rest the passengers broke into loud applause. Things got worse.
Inside the terminal, we stood around for over forty five minutes while the baggage collectors scraped our luggage of the walls of the hold. The passengers applauded again as the first item showed itself, a pram, which was never claimed and continued to circulate as cases accumulated around it.
Bags collected, we found the terminal entrance blocked with our fellow travellers, no longer applauding, now laughing at the rain pouring down on a steaming road.
Taxi drivers everywhere, not a brolly in sight, until we got into the city and then the world was full of brollies, ponchos, hats, scarves, all hanging on the arms of economic refugees from the Indian sub-continent.
What is also clear from an ancient and still alive city like Rome is that selling makes everything tick and if you don’t know how to sell then learn how to park cars. The streets are full of folk doing both, mostly from Bangladesh.
In conversation with one articulate Bangladeshi we learnt that there were two types: “There’s me, I’m here with a job and permanent residency. Then there’s the others, those you see selling trinkets and sleeping in the parks, they are here illegally, mainly because their original visa has expired but they don’t want to go home.”
And what did Rome inform us that might help Albany?
First and foremost, you can have too many sellers on a street, but, most importantly, hang onto your old hat and any other old stuff, because it’s the old stuff that makes you unique. You may not have noticed but most of the new stuff looks the same wherever you go.
Here in the Great Southern we can go back at least 20,000 before Rome and although that history is not full of conquest, plunder and pillage, it does have it’s profound and gentle meanings that could benefit a world now in another period of turmoil and madness.
The older the artifacts the better and there are not many creative mobs older than the Menang Noongars who built the fish traps on the northern side of Oyster Harbour.
Sponsored by Creative Albany jon@doust.com.au

I woke early and walked the 1k to the impressive circular centre. It rose up before me and almost immediately water began oozing into my vision and then the rest of me followed with small jerks of emotion. This surprised me but then I remembered that the Colosseo (Italian) was built on the bodies of dead Jews.
When Vespasian and Titus had finished destroying Jerusalem, the Jewish temple and what was left of Judea (70AD), they decided to spend all their treasures on a brand new entertainment complex.
The rain I mentioned earlier continued for four days, with the sky chucking down an ocean of water, washing away any accumulated heat and piles of tourist debris. One major benefit was that the rain lightened many a mood, and many, both local and tourist, engaged in casual conversations while huddled in doorways with complete strangers.
Only one sour note: one prissy goose in a museum doorway told me to move away from her because my poncho was wet. Doh!
Things I noticed about Rome: thousands of Eritreans; the Termini (train station) was packed with scammers, pickpockets and bag snatchers; thousands of Bangladeshi, some were aggressive and intrusive, but most were good humoured and fun; the busking gladiators around the Colosseo didn’t look like they could fight their way out of a plastic bag full of holes; Rome is filthy.
It should be a condition, we decided, of having a stall, or a busking position at a major venue, that you clean up your immediate surrounds.
Finally, Rome reminded us clearly of the massive refugee problem the world is facing. The streets were full of Eritreans, other Africans and Bangladeshi, and The International New York times informed us that over 50,000 Africans have arrived in Italy up to the end of July, more than the entire previous year, 2013.

This chap turned out to be an Israeli, busking at the site build by two emperors who
annihilated his people, scattered the rest and forced them to wander the earth for 2000 years – they found their way back, and he found his way here. 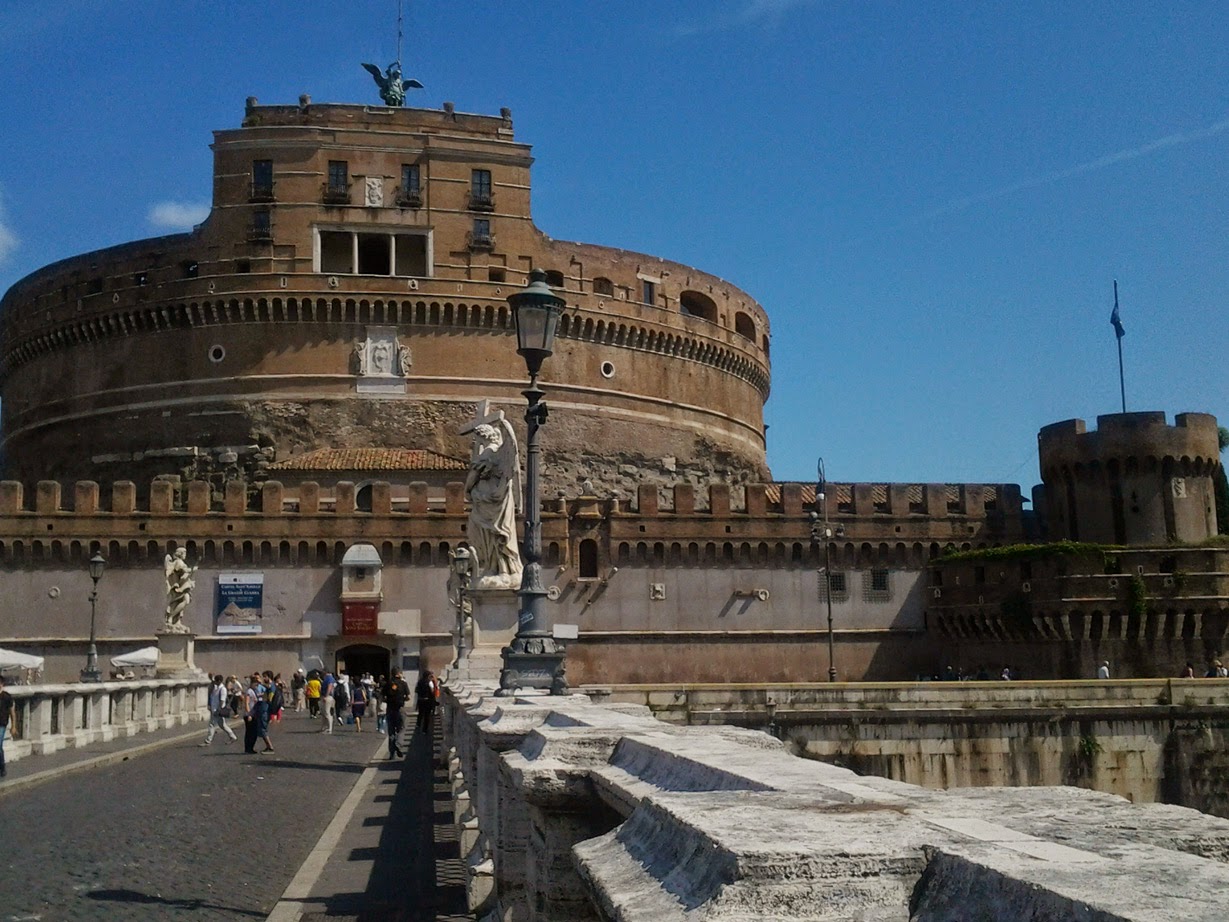 Well, they didn’t quite finish the Jews in 70AD, because Hadrian had to come back and finish the job, in 130AD, when Judea rose again. This is Hadrian’s Tomb but even he wasn’t left in peace and it was claimed by Christians and now it’s a museum. Every day thousands of curious and ignorant tourists clamber over his remains.